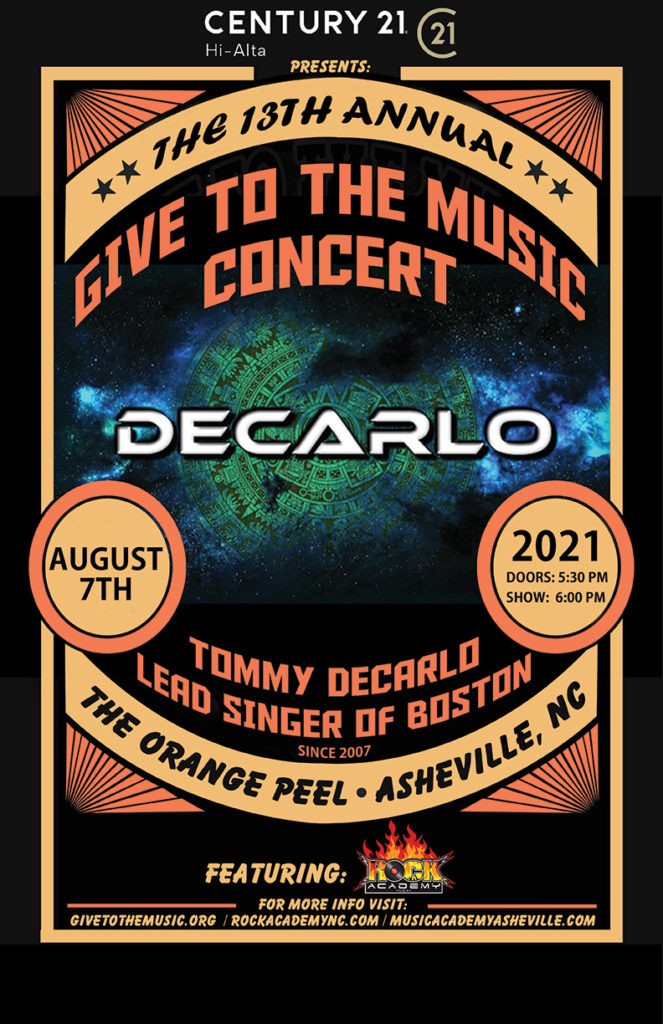 13th Annual Give To The Music Benefit Concert

with DeCarlo and Rock Academy

We are thrilled to announce that Tommy DeCarlo, lead singer of legendary rock band BOSTON, will be headlining our 13th annual Give To The Music Benefit concert at the Orange Peel on Saturday, August 7. Tommy DeCarlo has been on tour with Boston as their lead singer since 2007.  Tommy’s band DECARLO will perform a program of Boston’s greatest hits and DECARLO originals from their debut album.  Music Academy Asheville’s Rock Academy bands will warm up the crowd with performers ranging in age from kids to adults who are discovering their inner rock star.

In 2012, Tommy and his son Tommy Jr. formed DECARLO, which will be bringing the classic rock sounds of Boston to the Orange Peel, helping to raise money for Give To The Music and promoting music education for local students. DECARLO has just released their debut album, “Lighting Strikes Twice” on the Frontier Records SRL label.  Drawing on Tommy’s background and love of classic melodic rock, this album is deeply rooted in the sound of masters of the genre such as Boston, Foreigner, Survivor and REO Speedwagon.

GTTM has served the community for over 13 years and has helped more than 300 WNC students discover the joys of music by raising more than $250,000, all of which goes to pay for music lessons, instruments and camp scholarships.