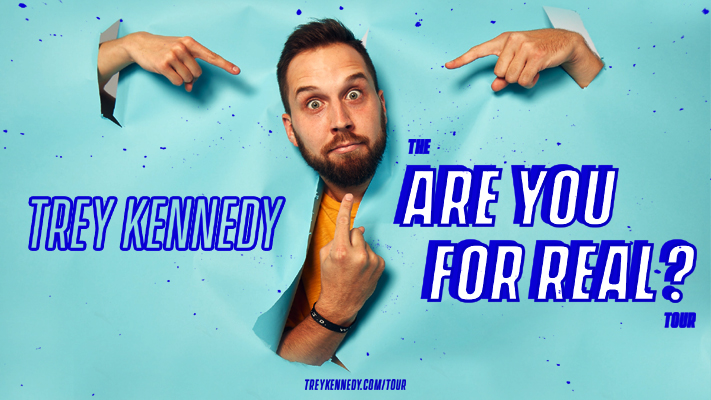 The Are You For Real? Tour

Social media star, writer, actor, musician – and, did we mention, comedian? Trey Kennedy announces The Are You For Real? Tour coming this spring. Presented by LiveNation and Premier Productions, the tour will offer the best of Kennedy’s live comedy performances in historic and popular theaters nationwide.

The 22-city tour begins on March 11 at Bomhard Theater in Louisville, KY and continues through May 1 at Royal Oak Music Theatre in Royal Oak, MI. Tickets go on sale January 31. Best known for his hilariously spot-on sketches that put the perfect comedic spin on the idiosyncrasies of specific groups (“Millennial Girlfriend School,” “Moms and Middle Schoolers During Flu Season Be Like”) Kennedy has written, produced, and starred in numerous viral videos – racking up millions of views in the process. With a dedicated fan base across every major social media channel, Kennedy has his finger on the pulse of the content people want now and the creativity to produce it in a way that is completely unique, insightful, and original.

“This tour feels like both a long time coming and an impossibility. I can’t believe I get to go and perform across the country after over seven years of creating internet videos in my home – it’s surreal,” says Kennedy. ” I’m so proud of this show and can’t wait for everyone to see it.”